You are here: Home » Ambassador » How Not to Rebuild an Ambassador

Remember this Peugeot 206 commercial from 2003? Giovanni Porro and Euro RSCG made this hilarious advertisement about young Indian man trying to rebuild an Ambassador. It actually won the Gold Lion for best advertisement then. Forget about the underlying stereotyping about India. Let us explain why it is ultimately a deeply tragic story.

The young lad is desperately longing for that French toy. He decides to rebuild an Ambassador to look like the car of his dreams. Despite the condescending stereotypes about India, the sequence is goodhearted and funny. The boy clearly has talent and a touch for working with cars.. His resourcefulness would be welcome even at Chennai Garage. But the story promotes a dangerous idea: that it doesn’t matter if an Amby is destroyed.

Cars like the 2003 Peugeot 206 come and go. The model actually had a very progressive yet tasteful design for that era. But still, the novelty wore off a long time ago. Japanese stole the design and reproduced it with much better cars. A 2003 Peugeot 206 has become an eyesore of the streets, that you wouldn’t be seen dead in. If you found one that still runs, that is.

Stereotype parade about India. Where’s the curry and the snake charmer?

On the other hand, the Hindustan Ambassador is industrial history on wheels. Clearly not a modern car, and hadn’t been flashy in 1958 either. But it belongs to the streets of India. It represents a permanency that you cannot have with a B-segment car that goes out of production every five years. And they still run.

You can always rebuild an Ambassador! If you take a run-down wreck (which we at the Chennai Garage often do), you can get the parts. You put in the work, and the car will be as good as new. Admittedly, that’s not very good.. But sturdy, and has a dignified style about it. Something that’s timeless.

Rebuild an Ambassador While You Can! 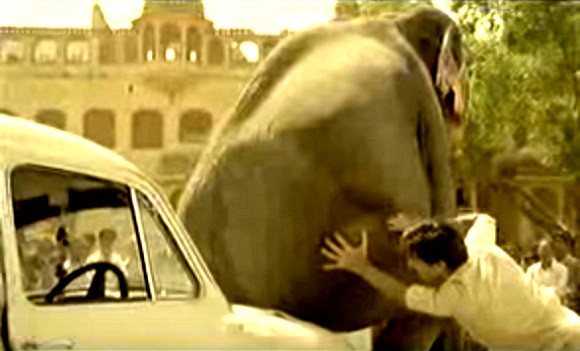 The Chennai Garage and PETA are on the same side about this: This is cruelty to animals and industrial heritage!

Now that production has stopped (suspended, officially, but face it: It’s over) Ambassadors have become irreplaceable. Still plentiful, but time’s ticking.. If you like veteran cars, it is the best time to get your hands on a few. People haven’t realized yet, what an iconic classic it is becoming already. Buy a few, while people only want to get rid of them; rebuild an Ambassador to be the car of your dreams! Have spares that’ll be treasured later.

Hurry up! Some people started acting already. If you need expert help, the Chennai Garage has years of experience how to rebuild an Ambassador. Restoration, customizing for individual collectors and for organized events like the India’s Cup rally, you name it.

The commercial named the kid “The Sculptor”, but he’s more of a Luddite.. Destroying an eternal Amby to create a car of the moment.. More than a decade later I bet he’s banging his head against the wall. Elephants live very long, perhaps he should ask it to sit on his head this time!