You are here: Home » Uncategorized » Driving in India: Expect Anything

Want to make an adventure of an everyday event? There are people who iron on tightropes, or cook in a mast main top, but that’s just silly. What about something that tens of millions of people do every day? Are you up for, say, driving in India?

Why is Driving in India So Difficult? 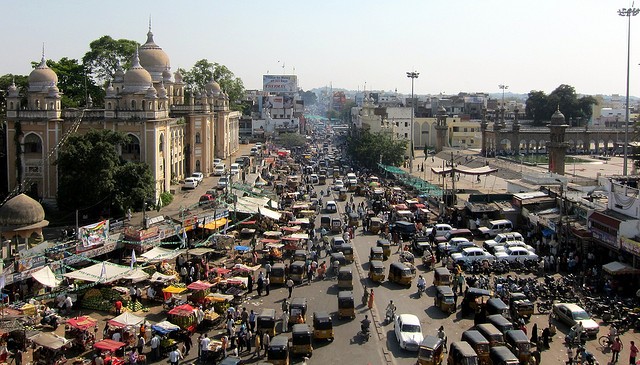 Because of the people, of course. Both their numbers, and their attitudes. First of all, it’s hard to grasp how massive Indian cities are. A European megapolis like London would be an average city over there. There are literally millions of people going to work, school and after their other business every day. Hurrying to work. At the same time. An average Indian might actually commute from a lot further, than a Westerner. The public transportation system is very important, but not nearly as efficiently organized as London. That means a lot of people on the road, with a fatalistic view on karma.

Thus driving in India is an art, a martial art at that. You need to adopt a fighting style. Quick and agile, like a motor rickshaw? Sturdy and stable, that breaks the waves of scooters? Perhaps the Hindustan Ambassador is your choice then. Whichever path you choose, you start out as a humble novice in the honking, never slowing, never stopping flurry that is driving in India.

Traffic Signs and Other Humble Suggestions 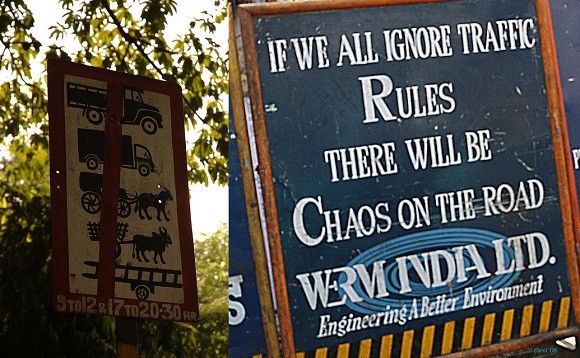 There are signs you won’t see anywhere else. And some people still haven’t given up.. (Photos: Honza Soukup, Carol Mitchell)

Driving in India you’ll see painted pictograms by the roadside, very much like our roadsigns. The difference is that people barely look at them, and they have only the vaguest effect on the traffic. Most of these signs are actually the same as the internationally accepted ones. They shouldn’t give you much trouble, unless you decide to obey them on impulse, causing a pile-up among the unsuspecting locals. Even traffic lights should be taken with a pinch of salt. As a rule, when driving in India you should do what the vehicle in front of you is doing, because that’s what the one behind you is intent on repeating.

The only version of traffic control with some efficiency is policemen directing traffic. When there’s a constable in the middle of an intersection drivers seem to be more or less doing what he is showing. They also try to pay attention to avoiding collisions a bit more. Speed limits are also just a suggestion, with nobody bothering about them. Traffic police acquired equipment to measure speeding only recently, and they tend to use it on highways where traffic is the safest anyway.

Drive Bad Vehicles in Bad Traffic.. And Love It! 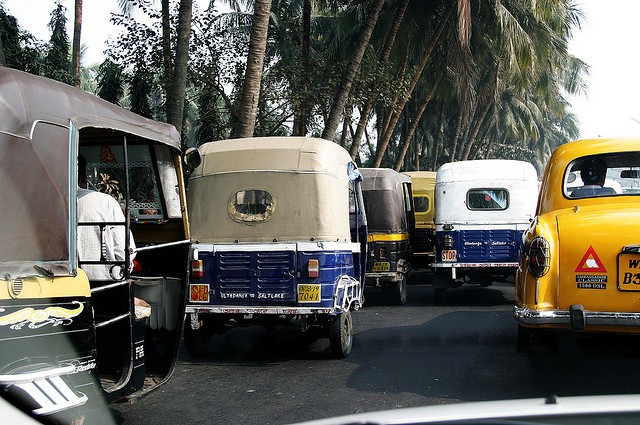 Unless you’re driving the 70 ton Arjun main battle tank of the Indian Army, you will get dents and scratches on your vehicle. There’s just no helping it. Why do you think half of the experts at Chennai Garage are tinkers and body ironers? That’s also why models like the tuk tuk or the Amby don’t go out of fashion – they can always be repaired, welded, tinkered. It’s the only sensible choice, when making an attempt at driving in India.

First of all, driving on the left side of the road, remnants of the British Empire. Sounds simple, but if you come from some other part of the world it can be tricky. Then of course, the vehicles. Driving a motor rickshaw will be different from anything you’ve ever tried. It’s unstable, small wheels, tall body. Body of a small car, but steered like a bike. Agile, but with a low top speed. The quick course before the Rickshaw Challenge provided by the Travel Scientists will be really useful!

Compared to these tuk tuks the Ambys are like a tank. About as agile, too.You know how to drive a car, but this is not just any car. No power steering, rough pedals, braking should be planned days in advance. And these are the vehicles you need to master before going out driving in India, the wildest traffic in the world? Why would you do it? Because it’s fun! It’s an accomplishment. It makes as much sense as climbing a mountain, and you have much more fun, and look way cooler doing it!